All Collections
VPS
Minecraft VPS
How to install Minecraft plugins on Game Panel?

How to install Minecraft plugins on Game Panel?

Everything you need to know about Minecraft plugins and Game Panel.

Written by Eimantas Miežalis
Updated over a week ago

How to install plugins on the Minecraft server hosted on the Game panel?

1. Set up our VPS plan by following this article. Make sure that you choose Minecraft Java Edition while creating your server instance:

2. Head to the server management page by clicking on your created server instance, and clicking on the Manage button on the right-hand side of the screen: 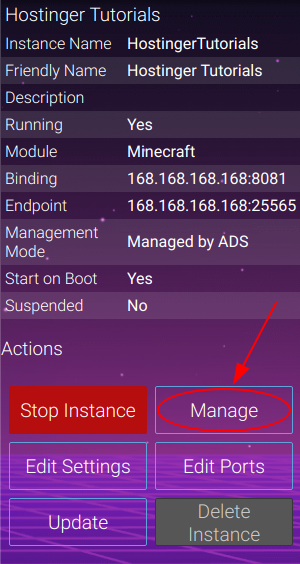 3. Choose the Configuration option on the left-hand side and then choose Minecraft:

4. Now we are on the Minecraft server configuration page.

1. At this point, your server is running on the Official version of the Minecraft server provided by Mojang. This version of the server does not support any kind of customization, and it is considered a Vanilla version of the game.

In order to run plugins on your server, we need to switch from the official version of the server to one of the following: CraftBukkit, Spigot, or Paper.

This can be changed by using a dropdown menu called Server type. Once you choose your server type, remember to click on the Download / Update button: 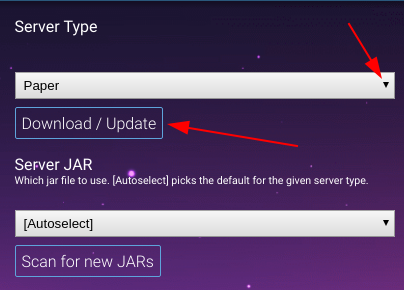 2. Now the server is ready to have plugins installed on it. Click Back < and choose the Plugins option on the left-hand side. This brings up a page that looks a bit similar to the Google search page, however, on this page, you can search for plugins:

3. Search for plugins you want to install and once you choose one of them, click on Install: 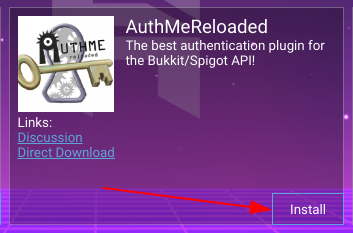 If you are not sure what plugin will change or what it is used for, you can click on the Discussion option to open up the Plugin forum.

4. Now your plugin is installed, and you just need to start your server to load the plugins with their configurations. This can be done by heading back to your server instance Status page and click on the Start button there: 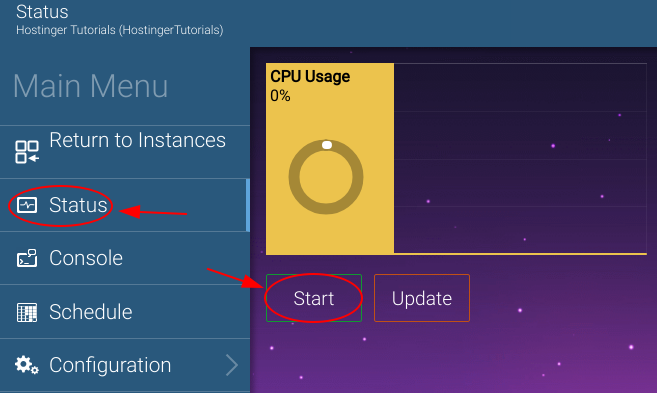 What to do if there's a plugin that you can't find while using the plugin search page?

Sometimes there might be a custom plugin, which may have been build by you, or it is just not being shown in this library. No need to worry though, there's a way of installing these plugins manually. The best part is that it just takes 4 steps!

1. Download the plugin which you want to use, but can't find in the plugin search. It should be in .jar format:

2. Click on File Manager on the left-hand side of the page and head to the Plugins folder: 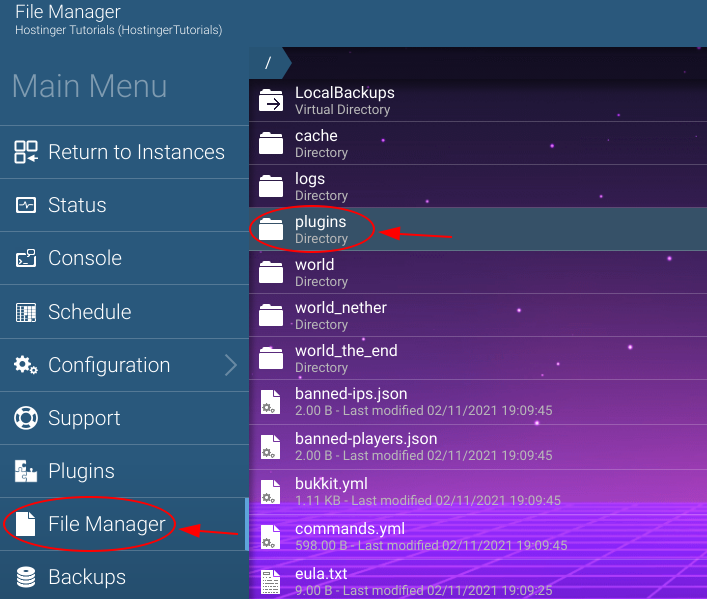 No matter which method was used to install plugins, all of them will be stored in this folder. It also holds all the plugin configurations.

3. Use the drag-drop method to upload the plugin from your computer to the server instance. Make sure that you are uploading the plugin to the Plugins folder: 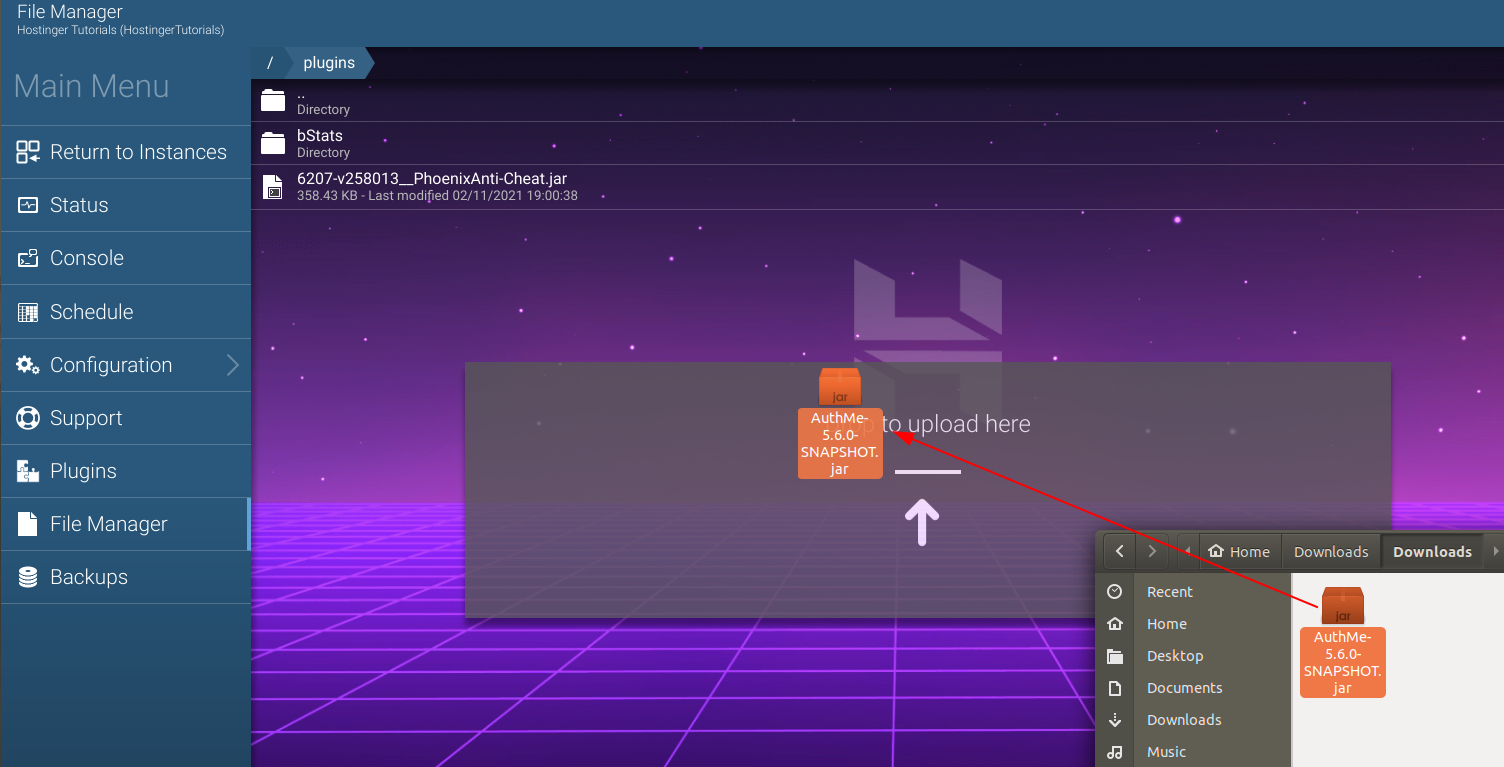 4. Now, the only step that's left is to start your server and load your installed plugins. If your server is already running, make sure to fully restart it.

After you start or restart your server and you want to verify if your plugins are running, you can do this by opening your server console and writing the command "plugins". This will display a list of plugins which is currently running on your server.

This command also works while logged in the server, however, you should use a slash in front of the command while in-game. It should look like this "/plugins".

If the plugin is not shown in this list, it means that there's an issue with either the plugin code, plugin version of the server itself. 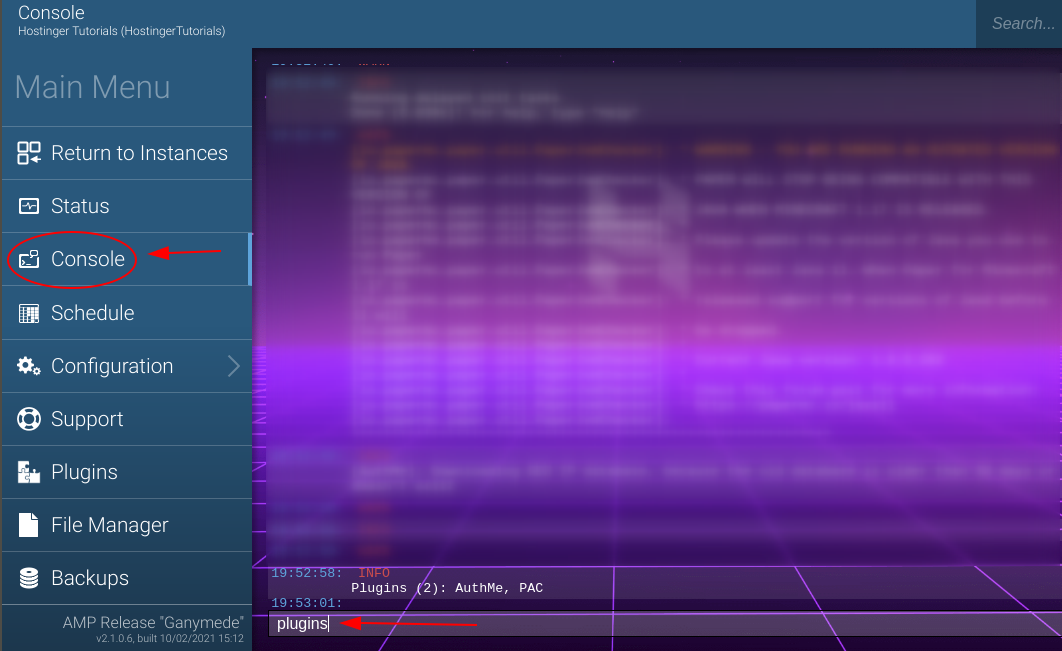 Recommended plugins that every server should have

Did this answer your question?